The Helmholtz International Lab aeroHEALTH divides its interdisciplinary research into one project management work package (Work Package 1) and four interlinked scientific work packages. The WP 1 (AeroMAN), headed by HMGU (Zimmermann/Czech), coordinates and manages the overall activities of aeroHEALTH. The joint management is conducted by the Work Package 1 (AeroMAN) and supervised by the Supervisory Board (SB). The PI and co-PI are directly involved in organizing the work within the scientific WP2–5. Within WP1 the main decision-making body of aeroHEALTH, namely the Supervisory Board (SB), is organized. The SB members are the PI and co-PI: R. Zimmermann, H. Czech, A. Kiendler-Scharr, T. Hohaus, Y. Rudich, M. Pardo, F. Theis/A. Marsico, C. Ogris. The SB is chaired by R. Zimmermann. A project manager (H. Czech, funded by the financial own contribution of the HMGU) coordinates the joint research activities.

In addition to conducting a challenging cutting-edge scientific work program, the aeroHEALTH Helmholtz International Laboratory program is devoted to support young scientists on all education and career levels. Firstly, the careers of four excellent early career scientists (the co-PI’s) at the partner institutes are supported by the direct involvement in the organization of the activities in the aeroHEALTH work packages as Early Career Research Associates. Secondly, young scientists on the PhD-student or postdoc levels are supported by direct contribution to the research and by intense mentoring. 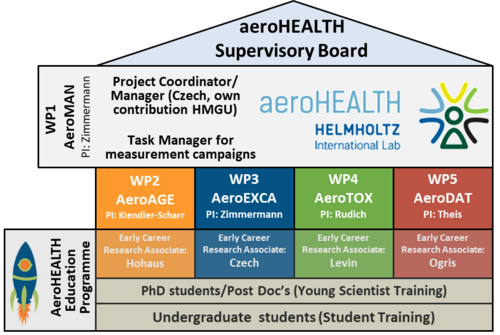